The electronic billboard is still essentially a new marketing concept for businesses. Because of its effectiveness, however, using digital signage is increasing in popularity. According to Inc., LED billboards give businesses the advantage of immediately taking action on consumer trends, instead of being subject to the timeline of media buys. The ability to frequently adjust or outright change your message is just one advantage of opting for an electronic ad instead of a printed or painted, static one. 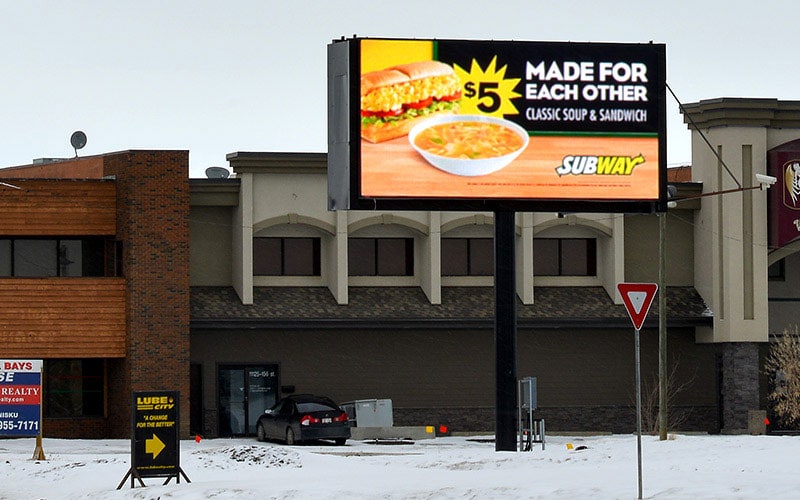 At LED Sign Supply, we long ago realized that an electronic billboard would also be more visible to the public than a traditional billboard. A driver may notice a regular billboard once, but after that it becomes part of the scenery and, even if a person glances at it as he drives by, the message may not register. With an LED billboard, though, there’s vibrant color, changing graphics and action to catch the eye of passers-by. It seizes awareness and commands attention to the message it displays. It’s also an effective way to inform drivers of opportunities that are time-sensitive. Radio ads used to fill that niche nicely, but in an age of satellite entertainment that bypasses traditional audio advertisement, digital billboards step in and take over.

The versatility and flexibility of the content that is displayed on an electronic billboard also allows for numerous businesses to advertise on one billboard, making it cost-effective for everyone. With all of these advantages, and knowing that LED Sign Supply is the leader in the industry when it comes to LED technology, there’s no better time to consider adjusting your marketing budget to include an LED sign. Even if you decide a full-blown billboard isn’t for you, we have a variety of other signs in various sizes to accommodate your marketing needs. Get your business noticed with an LED sign from LED Sign Supply.

Read More
GET AN ONLINE QUOTE!