Companies and businesses considering using LED signage as part of their marketing strategy often times wonder if this mode of marketing is effective during the winter months, when snow and hail are every day realities. The true question becomes, can LED billboards and messages hold up against the cold temperatures of a North Dakota or Minnesota winter? 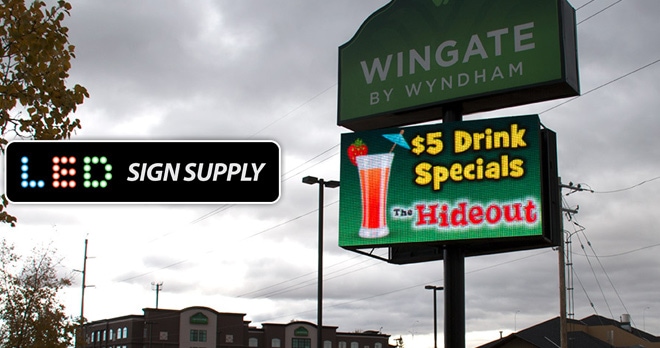 LED Sign Supply makes sure that each billboard is made from the finest materials, with craftsmanship that can carry through even the harshest winter. The bright bulbs in your LED signage will hold up in the face of daily hail and snow, allowing you to continue to promote your message and brand to the general audience on the road.

Perhaps you’ve never considered it before but LED signage can help increase road safety, with reminders to drivers about everything from drunk driving to texting while driving. Making drivers aware of accidents and possible detours is one helpful purpose of LED billboards and messaging on major highways in the United States. They are also a helpful way to remind drivers about an upcoming toll and alert them of possible delays on the road. LED signage becomes particularly important during the winter when drivers’ visibility is hindered by snow and hail. LED Sign Supply purposefully created top quality billboards and messaging that are made with bright bulbs that will not dull, even in the face of repeated snow and hail during the harsh winter months. It seems impossible right? Folks are surprised to know that quality messaging can withstand the repeated hits without suffering a loss of quality.

Highways especially can be one of the most dangerous places to be in a snowstorm. Thankfully, LED signage allows for messages to be broadcast to everyone on the road regarding upcoming traffic, including safety warnings. It’s comforting to think about the lives saved from a message regarding the dangers and consequences of drunk driver or texting while driving, broadcast from an LED billboard or sign on the highway. More than just a means to advertise, LED signage is also responsible for keeping folks on the road safe.